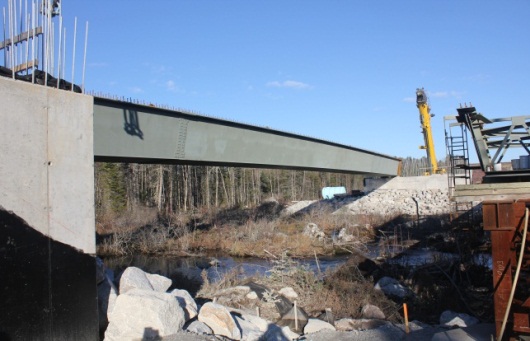 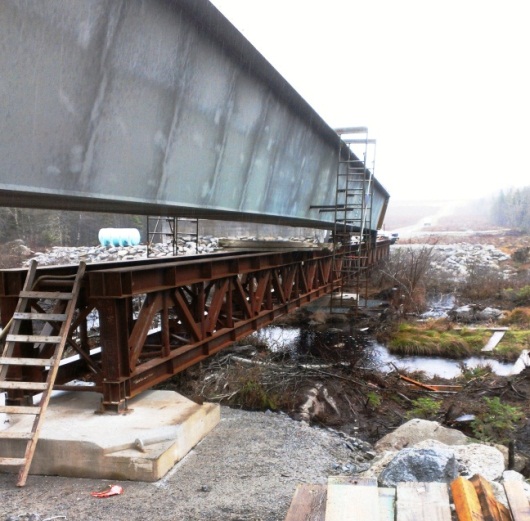 The erection approach involved the utilization of two, approximately 24.5 m long, steel box trusses which had been previously designed for the fabricator/erector for the Little Bras D’Or Girder Erection. The individual box trusses were spliced together to form a two span, 49 m long launch gantry. The steel box girders were incrementally assembled on the West approach and on the West end of the box truss assembly and longitudinally launched over Douglas Brook, where cranes  were positioned on the East and West approaches to simultaneously lift the girders off of the launch gantry and onto the adjacent permanent bearing assemblies at each abutment.

The steel box trusses were supported at each end and centrally utilizing fabricated steel bearing assemblies and concrete foundations. The centralized foundation was strategically positioned to minimize the potential impacts on the watercourse and ecosystem, by placing the foundation within the extents of an island within the brook, which was subsequently reinstated to its initial condition upon completion of launch.

The approach was used since the fabricator’s 50 m launching nose (also designed by HEC) was being utilized on the Terra Nova Bridge erection at the same time as the Douglas Brook girder erection. It also minimized the impact on the watercourse and ecosystem within the Douglas Brook, and provided an economical and feasible solution for erection of the parent girders.